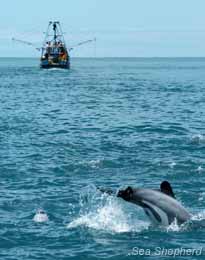 It was impeccable timing by the New Zealand Governement and a classic example of bureaucratic double standards regarding interim measures to protect the Maui’s Dolphin.  The International Whaling Commission (IWC) Scientific Committee has held New Zealand to account by not committing to national or international obligations to protect endemic dolphins. The Small Cetaceans Sub-Committee and the experts from around the world agreed that gill nets and trawling are the human induced threats directly attributing to the decline in the Maui’s and Hector’s Dolphin populations over the past 40 years. So, in a preemptive measure, timed to mitigate international glare at New Zealand, it is good news that the set-net ban has been extended further south down to Hawera and out to 2 nautical miles offshore. It is good news that there will be observers on commercial trawlers from 2 – 7 nautical miles offshore, and that another part of the solution has been established.

But it won’t save the dolphins.

This is a temporary measure. Extended protection to the 100m depth contour, set-net bans in the Manukau and Kaipara Harbours, and in the habitat range would be a more credible solution. The IWC Scientific Committee recommends that removing gill nets and trawling from the South Island to the North Island will mitigate population isolation and provide safe pathways for the populations to breed.

How does scientific fact seen through the lens of policy become a weakened form of protection that actually prevents species recovery? Internationally recognized scientific research has been mitigated by New Zealand’s visions of financial security through false claims of a clean, green economy that protects fishing and promotes mining in marine mammal protected areas. The experiment is a Darwinist example of the survival of the fittest, not as nature intended but as a manipulative species unable to balance reason over hubris.

However reason can prevail, with passion and perseverance. There are options to actualize effective protection for the Maui’s and Hector’s Dolphin through the Threat Management Plan due for consultation later this year and New Zealand will need your support during the submission phase (yet to be announced). Of course, the choices are not always in the hands of bureaucracy – you can make choices too!

If you’re interested in the protection of these rare dolphins please contact New Zealand’s Prime Minister to register your concerns (john.key@parliament.govt.nz).

Or the Minister of Conservation (kate.wilkinson@parliament.govt.nz).

Or the Minister of Primary Industry (david.carter@parliament.govt.nz).